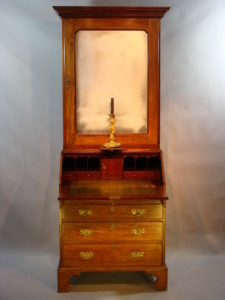 Rare Small George II Bureau Bookcase/Cabinet www.boxhouse-antiques.comOf all the numerous woods used in the making of English antique furniture you are most likely to encounter mahogany.

In the Americas it was found in South Mexico and on through Central America, Venezuela and N. Columbia. It also was found in the West Indian Islands, particularly in Cuba, what are now referred to as the British Virgin Islands, and Santo Domingo.

There are also varieties grown in Brazil and Peru.

Mahogany deriving from these areas is among the most desirable and large quantities found their way to England as ballast cargo on the sailing ships from about 1720 onwards. There is evidence of the knowledge and limited use of mahogany back in the 16th cent. partly for local shipbuilding. Possibly some mahogany may have been brought back to England by Sir Walter Raleigh ca.1552 – 1618.

As a result of a 1721 Act Of Parliament removing all duties from the importation of mahogany into England, vast quantities began to appear. Most imports before 1760 came from Jamaica. A change in the trade occurred after the Seven Years War 1756-1763, which resulted in French and Spanish colonial territory being ceded to Britain including areas rich in mahogany.  In 1766 the Free Ports Act allowed trade with French and Spanish Colonies. At this time high quality Spanish and St Domingo mahogany began to appear in England.

West Indian mahogany is close grained with a silky texture and when newly sawn it is yellowish-white in colour. It only acquires its superb nuances of colour after exposure to sun, open air and, of course, polishing.

Over-exploitation of mahogany from Jamaica meant that by 1790 stocks were severely depleted and suppliers turned to the Island of Hispaniola for supply. The French Revolution and France and Spain’s loss of overseas territory caused a shift in the supply of mahogany largely in favour of English traders. As supply decreased loggers turned to Honduras where quality mahogany was to be found.

Huge quantities found their way to England right up to the late 19th century but as traditional sources began to dry up loggers now turned to West Africa where mahogany supplies were of an inferior quality. Once more, by the late 20th cent. West African, Ivory Coast, Gold Coast and Nigerian supplies became severely depleted. African mahogany was obtainable in very large logs and is often well figured hence its popularity for veneering, largely recognizable through being machine cut and very thin.

As mahogany rose in cost imitations emerged. Beech was stained, but on inspection never approaches the quality of mahogany although it is very hard, carves and takes stain well. There are also varieties of Asian hardwoods close to mahogany and sometimes hard to distinguish, for example ‘padouk’.

Only through careful examination of English antique mahogany furniture from reliable sources will you come to to recognize the ‘real thing’.

Below is an illustration of a classic and sophisticated antique mahogany bureau cabinet made in England c. 1750 just after the earliest imports of mahogany from the West Indies.