As an antique dealer I am most interested in history including the history of the plague. One of the rarest items in my collection is a steel handled plague pan with a hinged,  perforated lid. It has an intriguing Latin inscription that has so far eluded successful translation.

A Brief History of the Plague

Recorded history of the plague demonstrates that It arrived on Britain’s shores first in 1348 and is believed to have wiped out up to 60% of the population at the time.

Knowledge of the history of the plague In London has been recently enhanced by the Crossrail archaeological excavations at two emergency burial grounds which were discovered outside the walls of the City. One has been found at East Smithfield, while the other is known to lie somewhere in Farringdon.

The Crossrail archaeologists said they had solved a 660-year-old mystery, citing DNA tests which they said proved they had found a lost burial site for tens of thousands of people killed in medieval London by the “Black Death” plague.

The breakthrough follows the discovery last year of 13 skeletons wrapped in shrouds laid out in neat rows during excavations for London’s new Crossrail rail line, Europe’s biggest infrastructure project. Archaeologists, who say the find sheds new light on medieval England and its inhabitants, later found 12 more skeletons taking the total to 25. They will further excavate the site to see if more bodies are buried nearby.
They said the remains probably belonged to victims of the plague, which killed about a third of England’s population following its outbreak in 1348. Limited records suggest up to 50,000 victims were buried in the cemetery in London’s Farringdon district, one of two emergency burial sites.
DNA testing of some of the skeletons’ teeth had uncovered traces of the Yersinia pestis bacterium, which was responsible for the Black Death plague, confirming that theory.
“Analysis of the Crossrail find has revealed an extraordinary amount of information allowing us to solve a 660 year mystery,” said Jay Carver, Crossrail’s lead archaeologist.
“This discovery is a hugely important step forward in documenting and understanding Europe’s most devastating pandemic,” he added. “Until Crossrail’s discovery, archaeologists had been unable to confirm the story.”
Some of the victims had been buried in 1348-50, and others in the early to mid 1400s, carbon dating showed.
Testing of the remains showed that 13 of the skeletons were male, three female, and two children. The gender was undetermined in the other seven skeletons.
It also revealed information about their lives. Many had serious spinal damage, suggesting they had carried out heavy manual labour. Some had injuries to their upper bodies consistent with being involved in violent altercations.
One of the victims had also been a vegetarian; many had suffered from malnutrition. Experts said 40 percent of them had grown up outside London, possibly as far north as Scotland, showing that 14th century London attracted people from across the country, just like the British capital today.

The use of the Plague Pan 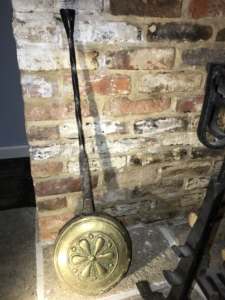 As mentioned above, interest in my rare plague pan means that I would like to know if post mortem research on those victims excavated in East London has revealed any signs of inhalation of combustible substances. The Plague Pan is often mistaken for a warming pan. The perforations are unique to Plague Pans which would have been loaded with an assortment of herbs and spices and carried around unventilated interiors giving off as much pungent smoke as possible.

Despite the DNA insights into the history of the plague, the enigmatic Latin inscription on my plague pan remains a mystery that the Crossrail dig has yet to resolve.

Further research reveals the inscription to have been written on our plague pan (stock ref. BHA- pan) in Middle (Old) French. It reads “AIME DIEU DE TOUT TONS”. This phrase comes from the Bible (Deuteronomy 6:5) and New Testament (Matthew. Luke). In English it translates as “You shall love God with all your heart, with all your soul and with all your might”.

Should any of you need prospective antidotes to the plague, please read on…

Among the recipes for air cleansers are the following: “Preservative by correcting the air in Houses. Take Rosemary dried, or Juniper, Bayleaves, or Frankincense, cast the same on a Chafing dish, and receive the fume or smoke thereof: Some advise to be added Lavender, or Sage.”xx Another explains how to “better correct the air of the Houses” by burning wood: “Also to make fires rather in pans, to remove about the Chamber, than in Chimneys.”xxi Another uses herbs and vinegar heated: “Take a quantity of Vinegar very strong, and put to it some small quantity of Rosewater, ten branches of Rosemary, put them all into a basin, then take five or six Flintstones, heated in the fire till they be burning hot, cast them into the same Vinegar, & so let the fumes be received from place to place in your house.”xxii

A preservative for the poor advises: “… take a handful of Rue, and as much common Wormwood, and bruise them a little; and put them into a pot of Earth or Tin, with so much Vinegar as shall cover the herbs: keep this pot close covered or stopped, and when you fear any infection, dip into this Vinegar a piece of a sponge, and carry it in your hand and smell to it, or else put it into a round ball [a container] of Ivory or Juniper made full of holes of the one side, carrying it in your hand use to smell thereunto…

And as such may we all, here in Lymington, wish ye a speedy recovery.