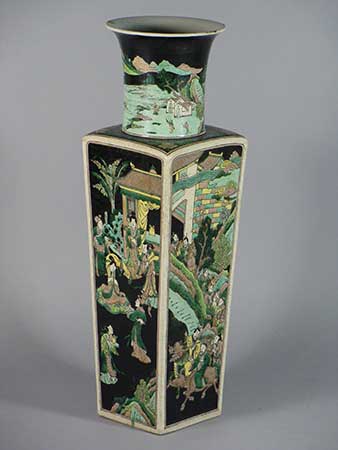 Objets d’Art can also come under the general heading of curio, ephemera or
(objets de) Vertu. This word is from the French for ‘virtue’ carrying the meaning of ‘merit’.
www.objetsdevertu.tumblr.com/

Origins of the Terminology Objets d’Art

The French translation literally means works of art but it is use to describe items that are not only fine art. The French place more weight to the phrase than do the English to ‘works of art’. This is why the antique world favours the use of this phrase. See Wikipedia for more.

Louis XIV was largely responsible for the appearance of major works of art for art for art’s sake. This was a digression from items that had more of utilitarian function. This was demonstrated particularly in the field of sculpture and bronzes. Although Objets d’Art can describe items from as far back as the 14th Century we generally recognise that antique objects from the 17th Century and later are the ones you are most likely to encounter.

From the middle of the 17th Century many copies of original Renaissance Objets d’Art appeared and it is most unlikely that you will encounter an original outside of major collections and museums.

Antiques centres and fairs always produce a range of objets as do the car boot sales throughout England in the summer. See:
www.carbootjunction.com
www.carbootsalefinds.tumblr.com
www.antiquestradegazette.com/directories/search-directories
www.hemswell-antiques.com

Check in your local newspaper for listings of local antiques fairs.

The TV series the ‘Antiques Roadshow’ has its origins in
Arthur Negus’ programme ‘Going for a Song’. A less glamorous and more down to earth
TV series from the early ’70s which always featured discussions on objets d’art.
http://www.amazon.com/Life-Among-Antiques-Arthur-Negus/dp/060034228X

Negus was a saleroom porter for a Cheltenham firm of auctioneers with an incredible wealth of knowledge and enthusiasm for antiques, especially objets.