When Dad and I travel together we always try to include visiting the best museum collections. The contents of the ‘Green Vault’ in Dresden did not disappoint. We were guests on the 2018 Rolls Royce 20 club rally to Poland and Germany. Krakow to Dresden was the section we drove.

In Poland we visited a number of castles many of which were superbly restored and converted into luxury hotels. However they were generally lacking contents of any note; most movables having been pillaged or destroyed during Poland’s long and tragic history of wars. The Russian soldiers in WWII apparently stole everything, even helping themselves to the bathroom fittings. In Dresden where we were treated to what is perhaps the finest and largest collection of treasures in the world in the ‘Green Vault’. 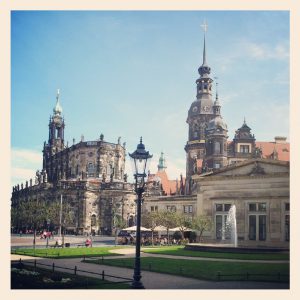 The collection was founded in Dresden by Augustus the Strong in 1723, and despite the destruction of around 90% of the city by the RAF and UAAAF in 1945, the major contents were largely salvaged.

The Old City is continuing to be superbly restored and a visit to the ‘Grünes Gewölbe’ or ‘Green Vault’ (restored to its original state as it was in 1733) where you will quickly run out of superlatives, is not to be missed.